Read this episodes transcript below. 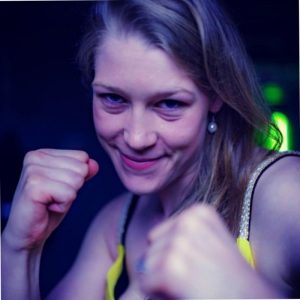 [Music] Hello I’m Marcus Railton and this is the Scotscare podcast. Scotscare is the only charity dedicated to helping disadvantaged Scots in London through a range of support including mental health therapy, financial grants, advocacy, sheltered housing for older Scots, job coaching, social events, befriending and support for Children and Families. The Charity’s been running for 400 years to help break the cycle of poverty experienced by some Scots.

In this series of the scotscare podcast I’ll be chatting to celebrities and supporters of the charity that have also forged a life in the capital away from home and about the ups and downs that can bring.

Scotscare: supporting Scots away from home in London.

Joining me today is professional boxer Hannah Rankin. Hannah became Scotland’s first ever female world champion in 2019 when she won the IBO super Welterweight Title, she then added the WBA super welcome with title to that in November 2021 and as if that’s not enough incredible talent for one person Hannah is also a professional bassoonist, having learned music on her mother’s knee since she was a young child. A boxer’s life is a busy one and it’s taken a fair while to pin her down for a chat but today we finally got there.

Hi Hannah, thanks for joining the ScotsCare podcast.

Oh no thank you very much for having me it’s pleasure to join you.

Oh I know you’re so busy and you know what we’ve had some great guests, we’ve had a guy from Star Wars, and we’ve had Christopher Brookyre best-selling crime author I uh clinical psychologist about the secret of happiness and I tell I tell my friends about these oh this is who I’m chatting with today and they’ll go all right fair enough right and you’re the first person when I said I’m chatting to Hannah Rankin they’ve said oh excellent can you ask her this and that?

I’ve noted a couple of questions down and I thought oh I could try and cleverly work them into the interview as if there were mine but once I come to them I’ll just say this is from Rory this is from Neil and that way they they get their answers .

That’s cool to know that!

Where did you grow up?

I grew up in Loch Lomond um my family have a farm at the top of Glen Luss so um I went to Primary School in last the tiny little village there and um yeah that’s why I lived my whole life until I moved down to London to study. It’s beautiful though we used to go on school trips there when I was a kid I know it’s like I always say to people when it’s sunny at home I wouldn’t be anywhere else in the world because it’s absolutely stunning, but it’s only about five days of the year so this is it

that so I moved down here involved

Friend now you spoke about a 12-week training

now training in Monaco and driving apparently I know so basically